BJP founder SyamaPrasadMookerjee and his Hindu Mahasabha formed coalition governments with Jinnah’s Muslim League in Bengal, Sind & NWFP. These tie-ups were done when Savarkar was the President of Hindu Mahasabha.

Like Jinnah, Savarkar too believed the Muslims as a separate nation Both ML and HM opposed the Quit India movement in August 1942 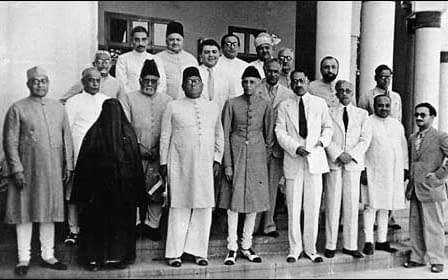 “The coalition is like bringing North Pole and South Pole together.” Jammu and Kashmir leader Mufti Mohammad Sayeed was heard saying when his People’s Democratic Party(PDP) was engaged with the Bharatiya Janata Party(BJP) in alliance to form a coalition government in February 2015. Though both were ideologically pole apart, they decided to form the government on the basis of an Agenda of Alliance with Common Minimum Programme(CMP). Even in British India, the coalition government of the Congress and the Muslim League(ML) could not run smoothly and lead to the Partition, but odd bed-fellows like the ML and the Hindu Mahasabha(HM) were able to rule over at least three Provinces despite being pole apart ideologically ! Normally it is believed that Mohammad Ali Jinnah was responsible for the Two-Nation theory and was blamed for Partition of the British India. Once a die-hard Congressman and opponent of the ML, Jinnah felt pushed to the wall by Mahatma Gandhi and felt humiliated by Jawaharlal Nehru. In 1937, when his Muslim League was denied even two seats in the United Provinces(UP) ministry by the Congress, Jinnah refused any compromise. The Lahore convention of ML in March 1940 under the chairmanship of the lifetime President of the ML, Barrister Jinnah, passed the Pakistan Resolution moved by A.K. Fazlul Haq, the Premier of Bengal. It called for a separate Nation for Muslims without using the word Pakistan. For Jinnah, Hindus and Muslims were two separate Nations who could not be together.

Not many people would know that the HM President for more than six terms, Barrister V. D. Savarkar, too used the same terminology while delivering the presidential address at Karnavati (Ahmedabad) convention of the HM in 1937, three years before the Pakistan Resolution. Shamsul Islam, an authority on the Partition history of India, states in his book Muslim against Partition of India”: “So there is no doubt that the Two-Nation theory was neither the innovation nor monopoly of the Muslim separatists. Chronologically, Hindu variant appeared first and Muslim variant followed it aggressively.” Savarkar who was for the Hindu Nation believed “the Muslim Nation made to live in a position of subordinate co-operation with the Hindu Nation.” Dr. B. R. Ambedkar, in his book “Pakistan or the Partition of India”, felt it strange that “Mr.Savarkar and Mr. Jinnah instead of being opposed to each other on the one nation versus two nations issue are in complete agreement about it”. He stressed: “Mr. Savarkar admits that the Muslims are a separate nation..He allows them to have a national flag. Yet he opposes the demand of the Muslim nation for a separate national home. If he claims a national home for the Hindu nation, how can he refuse the claim of the Muslim nation for a national home?”

Both Savarkar and Jinnah were critical of each other since they catered two separate vote banks. Both were critical of Gandhi’s Congress too. Jinnah had the Muslim support base where as Savarkar had the Hindu support base. Publically they were thirsty of each other’s blood but the “opportunist politics” or “pragmatic politics” made the odd bed-fellows to fill up the vacuum created by the Congress following “Do or Die” cry of August 1942 mass movement. Both ML and HM opposed the Quit India movement following the call given by Mahatma Gandhi and preferred to join hands with the British under the garb of the ‘pragmatic politics’. Even when most of the Congress leaders including Gandhi, Sardar Patel, Nehru and Maulan Azad were in jail, Barrister Dr. Syama Prasad Mookerjee, the second in command of HM, with the blessings of Savarkar, had joined the Fazlul Haq ministry in Bengal as the Finance Minister in 1941 and remained in the ministry of the mover of the Pakistan Resolution for nearly 11 months. Even earlier, Syamababu was elected to Bengal Legislative Council in 1929 for the first time on the Congress ticket. He was also the Union Minister for Industries in Nehru cabinet before resigning on 6 April 1950 to launch the Jan Sangh in October 1951 with the blessings of Madhav Sadashiv Golwalkar(Guruji), the second Sarsanghchalak(Chief) of Rashtriya Swayamsevak Sangh(RSS).

Sindh Province, being the birth place of Jinnah, was special to him in his movement for Pakistan. The Sindh Assembly was first to pass the Pakistan Resolution moved by G M Sayed in 1943 when the Province had a coalition government with diametrically opposite political forces i.e. ML and HM! Of course, the Hindu members walked out and the three Hindu Ministers voted against the resolution but the resolution was passed with 24 versus 3 in the Sindh Assembly on 3 March 1943. Even after passing the Pakistan resolution, none of the three Hindu ministers resigned from the ministry headed by Sir Ghulam Hussain Hidaytullah. They were Rao Saheb Gokaldas Mewaldas, Dr. Hemandas R.Wadhwan and Lolumal R. Motwani.

In the provincial elections held in 1937 in the North West Frontier Province(NWFP, now Khyber Pakhtunkhwa-KP of Pakistan) of Khan Abdul Ghaffar Khan, the Congress won the majority of the seats in the Provincial Assembly. In 1939, in protest against the Viceroy when the Congress ministry headed by Khan Abdul Jabbar Khan resigned, Sardar Aurangzeb Khan of Muslim League with support of the Hindu Mahasabha and Akalis formed the coalition government. Mehr Chand Khanna of the HM was the Finance Minister. Later, Khanna migrated to India and served Nehru Cabinet as Minister for Rehabilitation and Housing, respectively, between 1954 and 1962. Even in Punjab, there were serious efforts to have the ML and the HM coalition government installed. Both Savarkar and Dr. B. S. Moonje were very much active for the same. Jinnah had declared in one of his public speeches in Sialkot(now in Pakistan) that the HM was to have a coalition government with the ML as Savarkar and Dr. B.S. Moonje had directed to form a coalition government with Muslim League “ if it was inevitable” !

The historical facts which remained hidden so far are needed to be made public however bitter they may be. If one goes through the speeches of Savarkar at Bhagalpur and Kanpur conventions of the HM, his efforts to justify his actions of joining hands with the British rulers are crystal clear. Savarkar expected more and more Hindu youth to join the British Army and Air force when the British were engaged in the World War II. The Hindutva icon even condemned the efforts of Netaji Subhash Chandra Bose and his Indian National Army(INA) to align with Japan against the British. The facts of the history and the events which took place cannot be denied.
– Dr. Hari Desai