New Delhi: “At least 45 Jamia Millia Islamia students (15 women and 30 men) were sexually assaulted by policemen in the attack on the University on February 10, and they (police) also used chemical gas in the attack”. This was revealed in a fact-finding report on Monday by the prominent women body ‘National Federation of Indian Women’ (NFIW).

Releasing the report through the video conferencing, NFIW president Aruna Roy said that the government must set up a special judicial enquiry to investigate the heinous nature of the crimes perpetrated by police personnel and due compensation be given to the victims of police brutality. 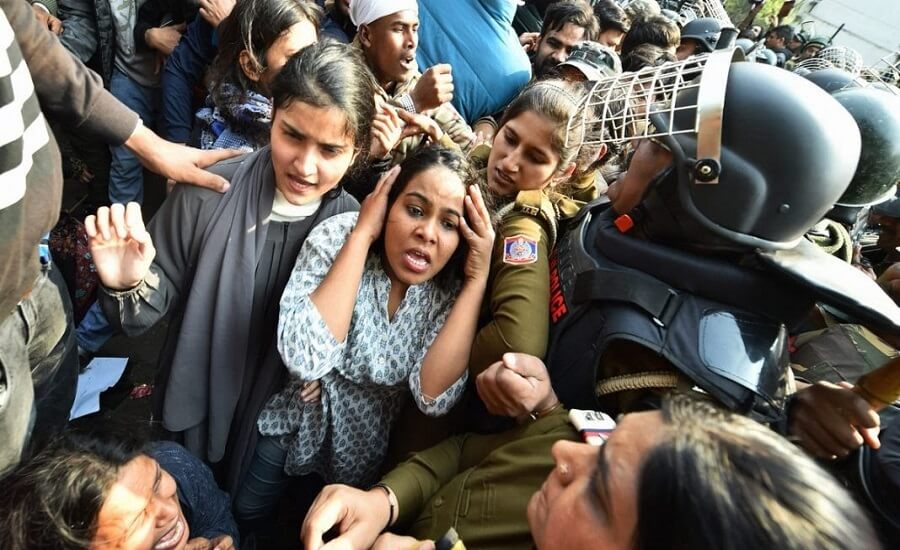 Noted activist and former civil servant, Roy said the targeted sexual assault on women and the degree of violence used on the protestors has been unprecedented.

She said that the Jamia students and residents were brutally attacked by the police, even as they were protesting peacefully against the Citizenship Amendment Act, National Register of Citizens and National Population Register (CAA, NRC and NPR). 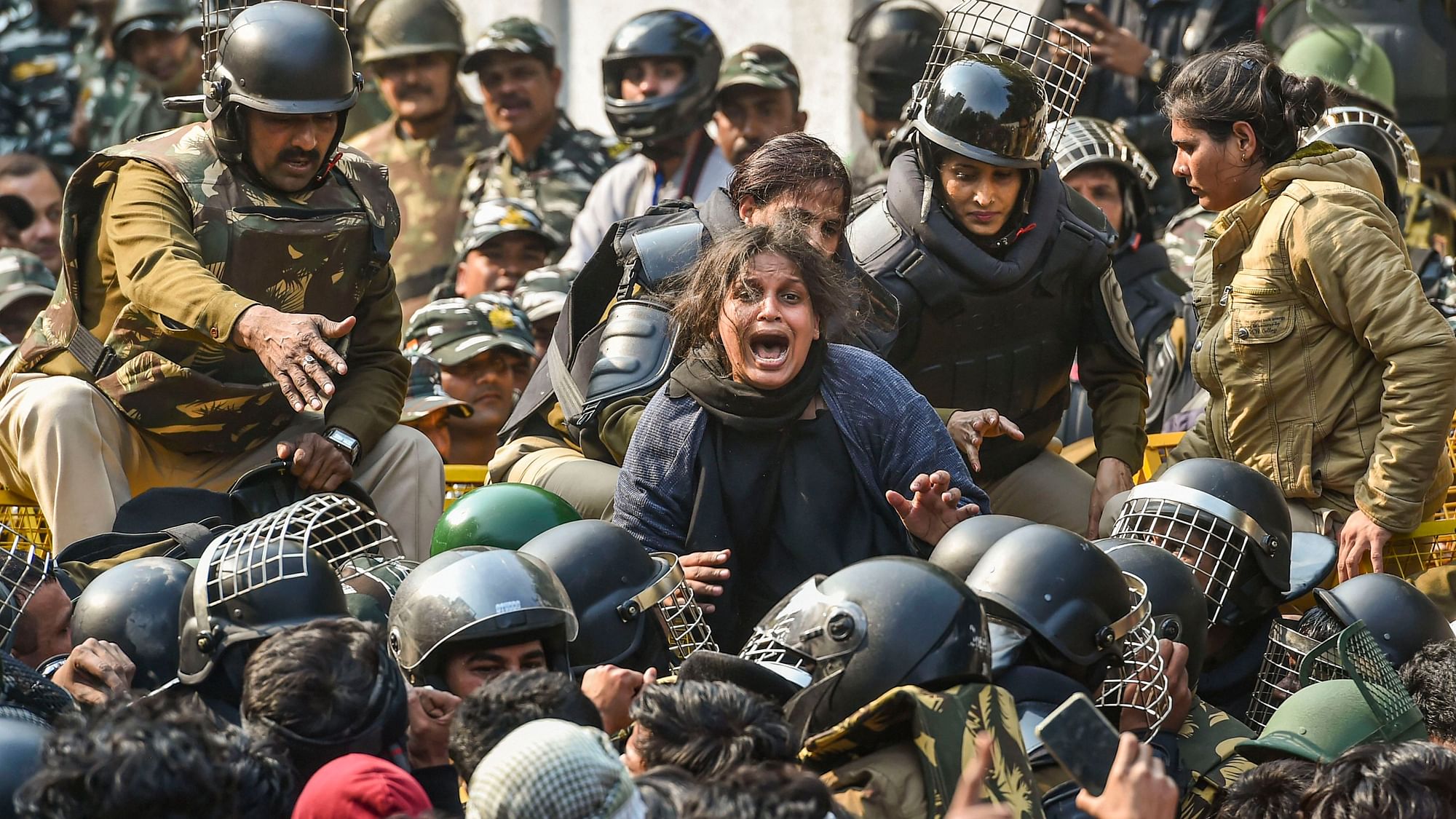 “As was seen in previous campus attacks in JNU and Jamia itself, there were police personnel without name plates and badges. Also, some of the attackers wore jeans, non-police helmets and vests over their civilian clothes. The vehemence and sense of vindictiveness of the attackers was extra-ordinary,” she added.

Speaking on the occasion, Annie Raja, National General Secretary of organization, said in a democracy, no one should have to suffer the kind of brutalities that the peaceful protestors in Jamia have suffered on the 10th of February, 2020. 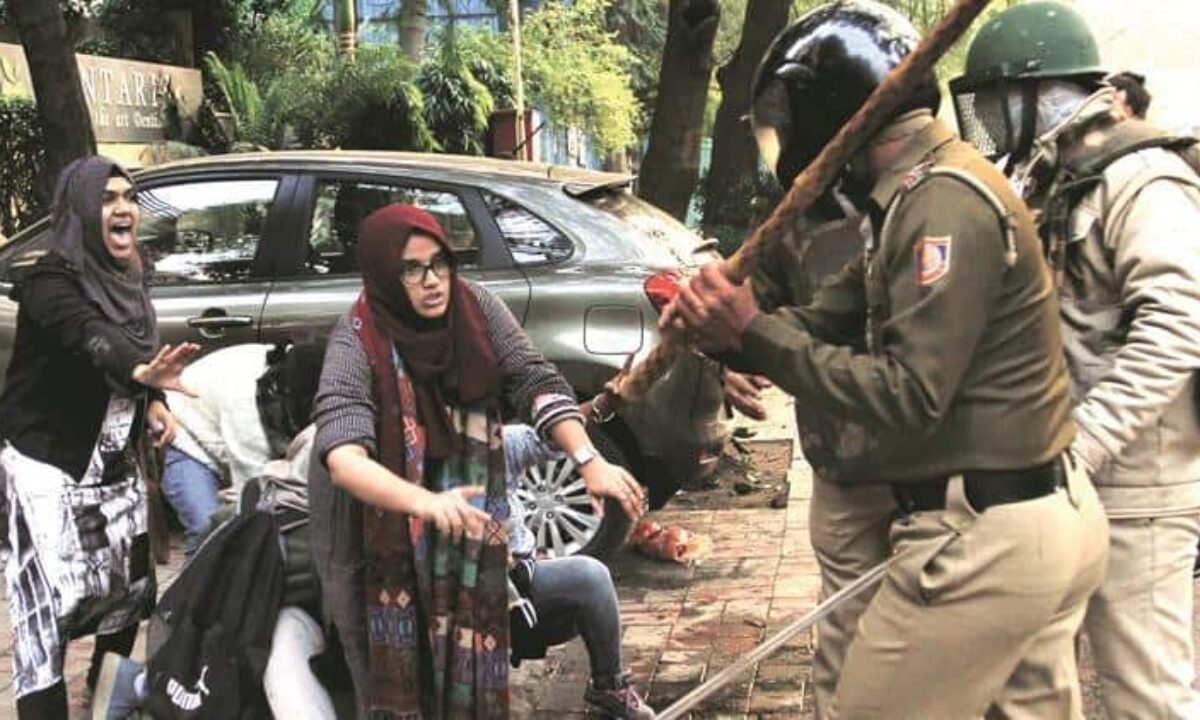 The inhuman manner and the ferocity of the assault, was apparently to drive home the point that the anti CAA protestors are enemies of the State, Raja added.

According to the Report, the Jamia students and teachers underlined two specific issues, 1) the targeted violence on women; and 2) the use of chemical gas on peaceful protestors.

Fact Finding Report on the “Targeted Violence at Jamia on 11th February 2020” stated that about 15 women and 30 men were assaulted in their private parts. 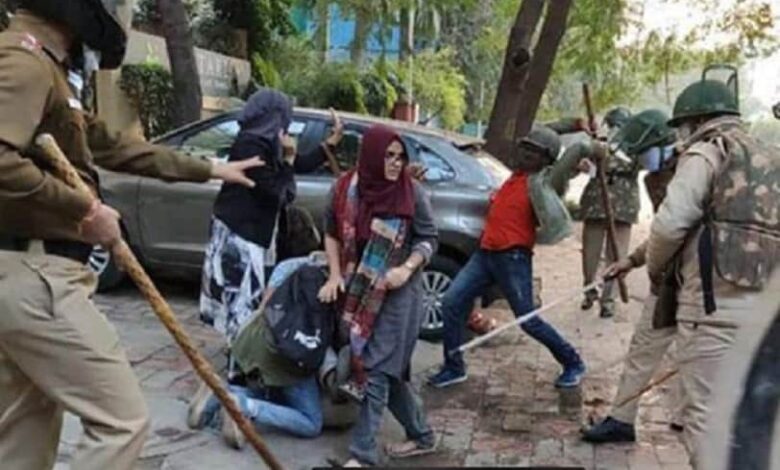 “Women were molested by the male policemen, who attempted to tear their clothes, punched their breasts or stomped on them with their boots, as well as tried to insert their batons into the vaginas. At least 15 women were stomped in their private parts, and talked to some women whose vaginas were torn due to the blunt end of the baton being inserted. The pain, pus and blood rendered them bed ridden for weeks after the assault. Women, as young as 16 and as old as 65, were sexually assaulted, many of who are now suffering from serious gynaecological complications. A woman who had previously been operated for a cesarean delivery kept pleading for the beatings to stop, but the assault continued till the cop was pulled back.” 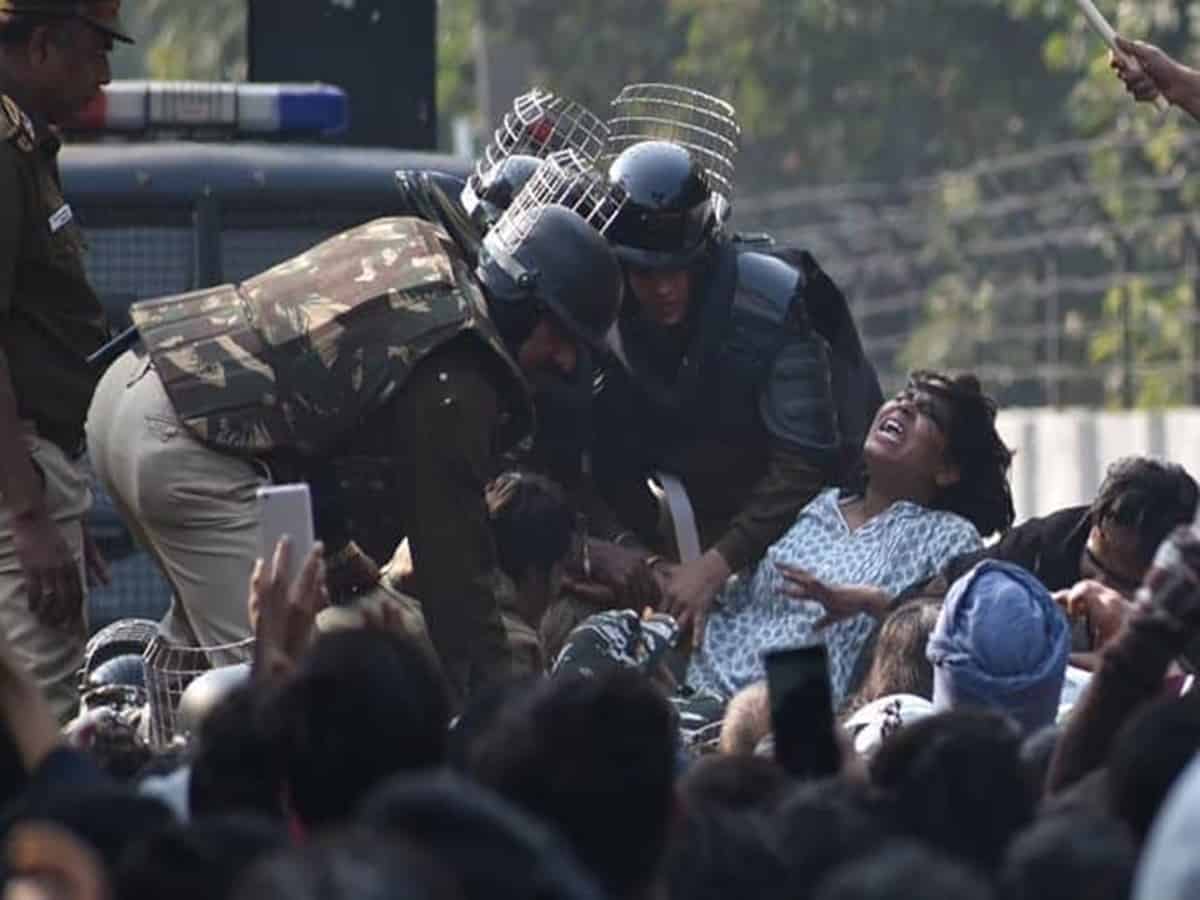 “The sexual assault on men was equally severe. The attack on groin and rectum resulted in severe injuries. The heinous and common feature of the attacks on both the genders was an attempted demonstration of the unlimited power of the police over the protestors.”

Assault in the bus: “The horror and terror of the attacks did not stop with the protestors at the barricades. About 30 boys (students and protestors) were picked up to be taken to the police station. In the approximately 40 minute bus drive to the station, the boys were constantly beaten in the bus. All suffered from groins being kicked by boots.” 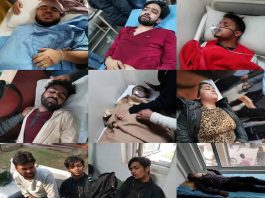 Chemical Attack: The spray was not tear gas as no one complained of tears or irritation to the eyes. What they did complain about was immediate immobility, drowsiness and severe headaches. They also experienced choking and muscle pain. Most were unable to stand for hours after being sprayed on. A few students, who moved away from the area where the gas was being 4 sprayed, also complained of nausea, splitting headaches and muscle pain that made it difficult for them to move. It is evident that spray was a chemical with serious health implications. When teachers, activists and students asked about the gas, the police declined to give any clear answer. They claimed it to be mosquito fumigation spray that had drifted to the barricades from Holy Family Hospital. That claim is totally false as the hospital in question was nearly a kilometer away from the barricades.” 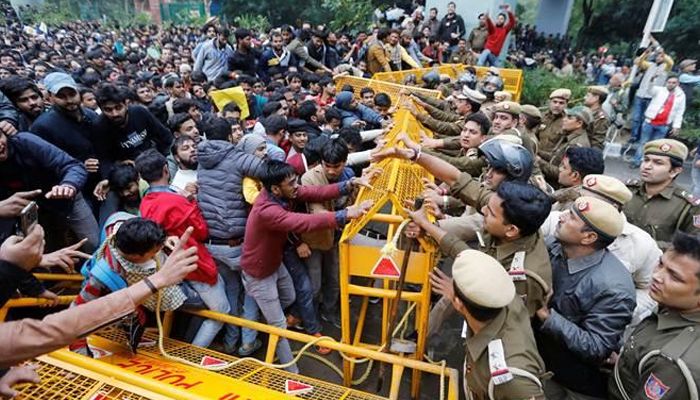 The 3-member NFIW team further added that “No doctor we talked to conducted a blood test or a urine culture test of the patients. Although some of these symptoms may be ascribed to the severe injury on genitals and stomach these were symptoms also seen in those who had not been attacked physically but were in the vicinity of the barricades from where the spraying was being carried out.”

The testimonies of students and teachers of the University have highlighted the role of both the police as well as those in plain or fake uniforms in the targeted attack. 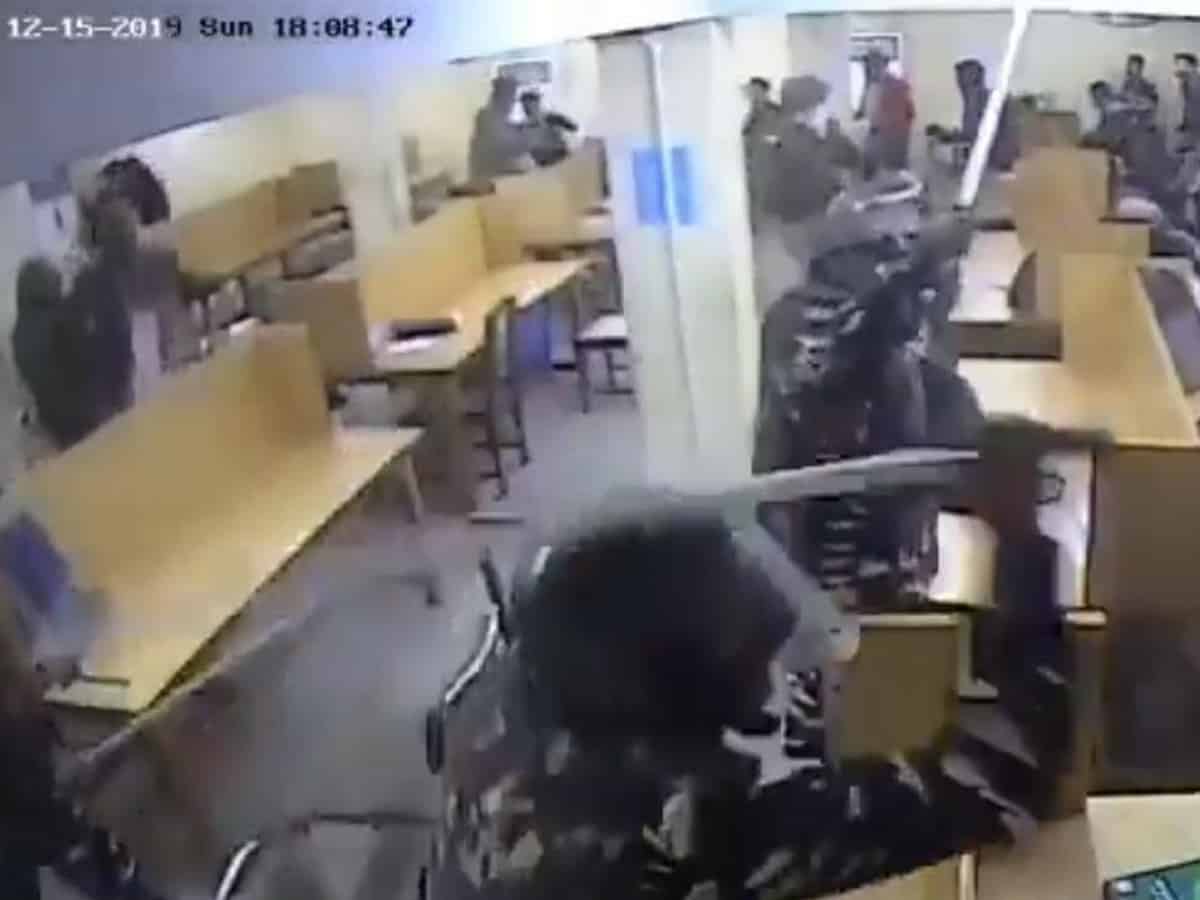 “What is striking about the narratives and testimonies is the role of both the police as well as suspected RSS goons with fake uniforms attacking the protestors. As was seen in previous campus attacks in JNU and Jamia itself, there were police personnel without nameplates and badges to tell their ranks or reveal their identity. Also, some of the attackers wore jeans, non-police helmets and vests to cover civilian clothes.” 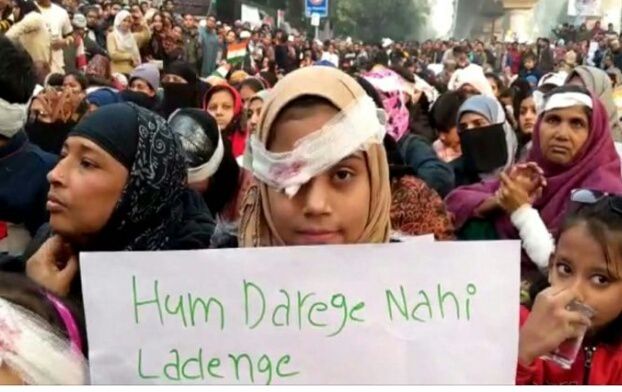 In view of the terrible assault made on protestors on 10th February, NFIW made following demands:

a) The Ministry of Home Affairs should give a white paper explanation on the events of the 10th evening, from the setting up of barricades to the detaining of students in the police station.

b) The government must institute a special judicial enquiry to investigate the heinous nature of the crimes perpetrated by men in uniform.

c) Apart from enquiry, a team of doctors to investigate and submit a public report on the use of chemicals on the protestors, and the nature of injuries of the survivors.

d) File FIRS as NO FIR HAS BEEN FILED till date regarding the injuries suffered by the unarmed protestors. Intimidation of survivors and related groups needs to be noted immediately. The harassment and threats need to stop.

e) As the crimes and excesses committed by the men in uniform are increasing by the day, we ask for not only a policy of police reforms, but also the implementation of the related sections of the Justice Verma Commission Report, that have been conveniently overlooked by successive governments.

f) It is not only the brutality exercised by the police but the Islamophobic ideology that the police forces have been indoctrinated with that needs be addressed on an urgent basis.

g) Lastly, demand for adequate compensation to the survivors for the injuries suffered.

How to overcome Selfishness

The hot water you drink is good for your throat.